Our Centre Linear Former Trays for the Purusline Living are for tiled floors only and can be installed on either concrete or wooden joists. When fitting on wooden joists, these trays must be installed on top of the floorboards, following our installation instructions and installation video. The outlets are positioned in the centre of the Centre Linear Former Trays.

All former trays can be cut to size, as long as 200mm is left around each edge of the outlet hole.

Tiled wetroom floors must be tanked. We recommend our Puragum Tanking Kit, which is our waterproofing system for use with tiled floor finishes. Each tanking kit covers an area of 8m2. 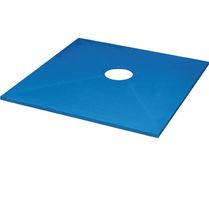